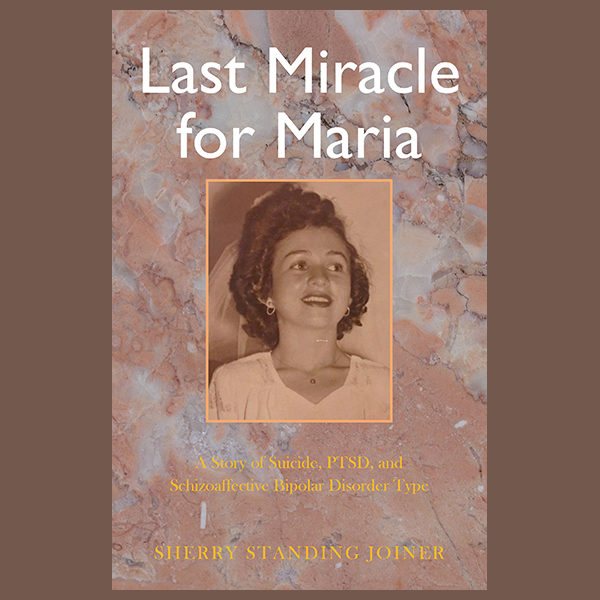 A Story of Suicide, PTSD, and Schizoaffective Bipolar Disorder Type

Joiner’s (Sherry Goes Sane, 2013) mother Maria, was a God send when Sherry was young. Maria, who was a World War II bride and Brazilian immigrant, created a safe place for Sherry in the thunderstorms, sitting her on her knees and saying prayers in English and Portuguese as they fought the dreadful monster in the sky together. Last Miracle for Maria is an inspirational and vividly honest Biography written from the heart. One will understand the deep love Sherry has for Maria. It explores the life of a talented and kind woman, who became a License Practical Nurse in the States and struggled to help her children afflicted with childhood diseases, Sherry with her two bouts of polio and Sherry’s sister, Diana with scarlet fever. When Sherry turned six years old her mother became alcohol addicted and violent. As a result, Sherry went through years of sadness and therapy seeking help from psychiatrist and counselor. Maria married a second time and Sherry’s half brother, Doug was born, later he contracts AIDS. Maria was losing touch with reality and living on the edge with delusions and psychotic episodes. Her third husband caused her stress and was abusive to her children. Sherry developed Schizoaffective Disorder and PTSD and Maria fought to overcome her alcoholism and mental illness which she was a victim of. Sherry takes readers on hers and Maria’s life and grief journey as she helps others with their own challenge of suicide. With Maria’s death to suicide, Sherry helps others in their darkest hour.