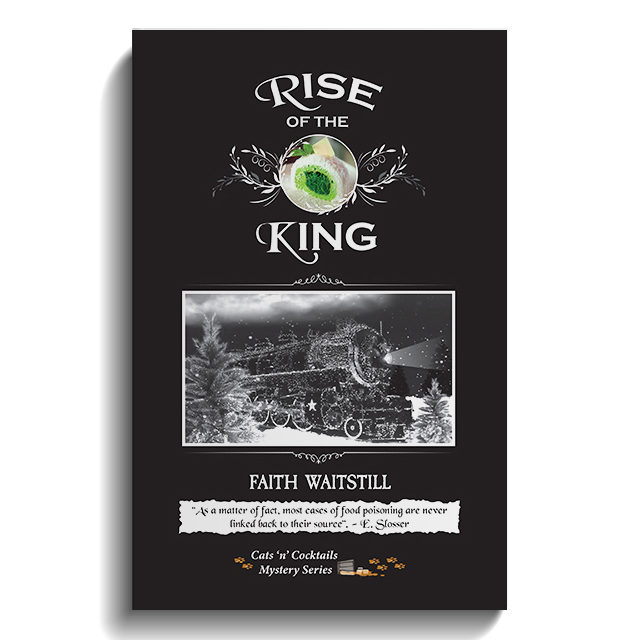 Rise of the King

The Cats ‘n’ Cocktails Mystery Series is a cozy mystery set in the fictional northern town of Four Oaks. Book 2

Rise of the King: Book Two in the Cats ‘n’ Cocktails Mystery Series – Anya is a newly minted billionairess, and Cats ’n’ Cocktails is a huge success, but Ching is suddenly missing. All’s well that ends well when he turns up at the lake house minutes before a blizzard is set to strike. Still, it’s a mystery to Anya how he found his way through the woods. Anya receives an invitation to visit old friends of Martine’s in New Orleans, and The Christmas Train sounds like an exciting mode of travel. With Ethan unable to accompany her— she, Tate, Ching, and Don Pedro ride the rails alone. Tate confesses his true feelings to Anya, but all decisions must be put on hold while Anya searches for a connection between Ching’s mysterious aversion to potatoes, two suicides, and a murder.

Cats ’n’ Cocktails, formerly McClean’s Pub, is a cat rescue bar and grill owned and operated by Anya McClean. Her sidekick, a cat named Ching— once the beloved pet of a fortune teller— possesses his own supernatural gifts when it comes to exposing unscrupulous characters. Anya’s growing frustration with the incorrigible cat quickly turns to awe when she realizes his misconduct is purpose driven. Using tarot cards, rune tiles, and wildly overt acts of feline impropriety, Ching leaves a trail of clues that foretell the future, unveil hidden motives, and lead to arrests.

The Cats ’n’ Cocktails Mystery Series is a brand new cozy mystery series set against the backdrop of the tiny northern tourist town of Four Oaks where visitors are drawn to Main Street’s collection of fascinating shops and quirky on-theme restaurants—Perfect for fans of KoKo and Yum Yum in The Cat Who Mystery Series or Rita Mae and Sneaky Pie Brown! *****THIS IS A SERIES YOU’LL WANT TO READ IN ORDER. The characters’ lives evolve in dramatic ways that give these books a lot of power. You’ll be very confused if you try to jump around! Things change fast in these books!