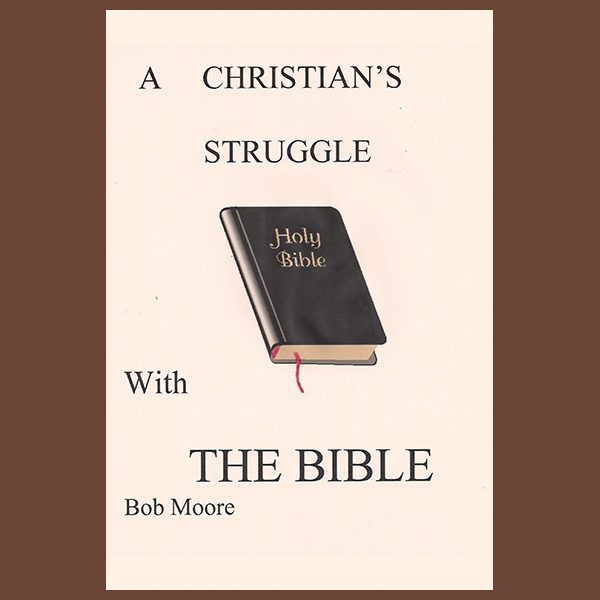 A Christian’s Struggle With the Bible

Seemingly, no matter how much our culture has evolved scientifically, technologically and educationally over the decades, many evangelical ministers and laypersons remain steadfast and unwavering in their fundamentalist position, believing that to question anything in the scriptures is taboo, and the dictionary says, “A taboo is an activity that is forbidden or sacred based on religious beliefs, and breaking a taboo is extremely objectionable.” In other words, to those who are unwavering in their belief will remain with the status quo, as historical and scientific facts evolve around them. One important thing about this book is that most all of the characters have the year of their birth and death, and an explanation is given on how these dates were derived from the Bible. Thus, the reader knows what era in history he/she is reading about.
I believe that God challenges us to question and to even have some doubt, as did the “doubting Thomas and even John the Baptist near the end of his life. The first of ten segments touches on many facets of Jesus Christ’s life, from conception to the ascension by introducing thoughts and facts and historical data and explanations that are not taught in Sunday School or Bible Study classes or the pulpit, making aware information that the reader has not delved into before. The same being with the remaining nine segments. The second gives a comparative analysis of the four gospels covering Christ’s life and ministry, showing how some scriptures differ from gospel to gospel about the same subject matter. Then, the third segment is about the one place that all Christians and believers of other faiths seek after death, which is the place called heaven/paradise. I tried not to leave any stone unturned in the Bible when writing this segment about Heaven. The fourth segment is about the Bible’s Creation story that’s dated at 6,000 BCE, versus Theistic Evolution that’s well documented in historical and scientific data. Segment five covers much historical and scientific data regarding Noah’s Flood story, where two of each animal on the planet is loaded on the ARK (boat) along with Noah and seven of his family, while God drowned billions because of being nonbelieving sinners. This Bible date is 2348 BCE, which puts the worldwide great deluge at about 1650 years after the biblical creation date, and two hundred years after the Great Pyramid of Egypt was built. These two events are well documented with pertinent data and interesting facts, and readers will learn there are actually two Creation and Flood stories in Genesis. The remaining five segments involve characters and happenings found in the Bible that are fascinating reading, like Abraham’s dysfunctional family saga, and after delving into the book’s contents the reader will wonder why this or that has not been brought to his/her attention before, or why they have not noticed these things when reading the Bible. Some will probably think, WOW!
The seventh segment of this book is a lengthy in-depth writing of Moses and the Exodus of the Hebrew people out of Egypt’s Land of Goshen, across the Red Sea into Egypt’s Sinai Peninsula, then wondered to the eastern side of Egypt’s Sinai, adjacent to the Canaan border where they remained for 38 years then left for trans-Jordan and after Moses death, they crossed the Jordan from the east into Canaan land, that was a protectorate country of Egypt since 1460 BCE, before the Exodus and remained a protectorate for 300 years. The Hebrew People’s experiences during the Exodus period is a don’t miss read, being a writing that is backed by both historical and archaeological facts. Segment eight is about Joshua’s conquest and the saga of the 325 years of the Judges and Apostasies. The fascinating segment nine tells of Israel’s Golden years under the 80 years reigns of David and Solomon, two Kings that have no historicity. Segment ten gives data about varied Bible history personalities.