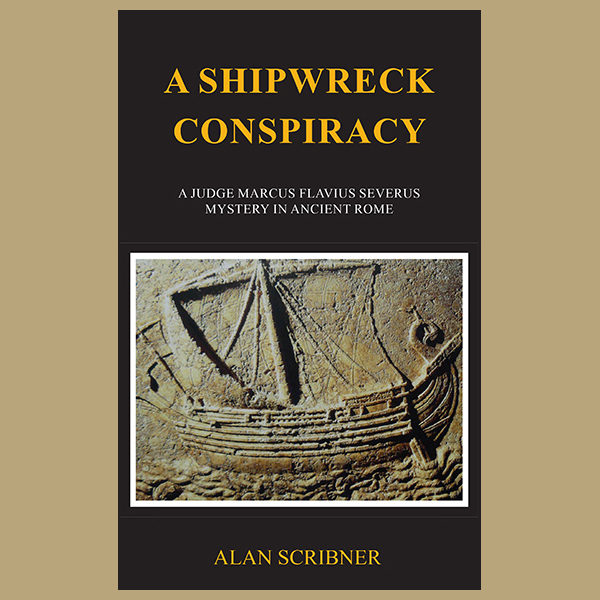 A Shipwreck Conspiracy is the 8th in the series of highly acclaimed and best selling Judge Marcus Flavius Severus mysteries in Ancient Rome. This story takes place in the year 171 CE during the reign of Marcus Aurelius and two years after the events in The Persian Assassin. Marcus Severus is happily retired in his villa in the Alban Hills when he and his family come to Rome for a visit. While there Severus visits the Court of the Urban Prefect and attends the final day of a sensational trial. A merchant ship, the Andromeda, was deliberately beached in the middle of the night at a place where a gang of robbers was already waiting to seize the ship’s extremely valuable cargo of silk from the country in the far East known as Seres or Thina. Crew or passengers who got in the way were randomly murdered and the Captain of the Andromeda was now on trial for the shipwreck, the robbery and the murders. But there is a major problem. The Captain claimed he had been knocked unconscious during the robbery and confessed only under excruciating torture. And the question of the corroboration required by Roman law of a confession extracted by torture was in doubt. Without corroboration, the burden of proof, which in Roman law is on the prosecution, could not be met and the Captain should have been acquitted, not convicted. Severus is intrigued and gets himself appointed a Special Judge to investigate the case for the appeal to the Urban Prefect. He seeks missing ship’s officers, learns about the silk trade, and questions owners, investors and merchants about the ship and its cargo. He discovers that behind the conspiracy, directing it, is a mastermind known to the other conspirators only as Ipse, ‘Himself’, a term used by the imperial court for the Emperor or by a school for its head. Who is Ipse? And what really happened on the Andromeda? Severus’ quest to find out is regularly stymied by lies and concealments of people being questioned, and more ominously by murders of suspects before they can be questioned. And, as he gets closer to the truth, there is even an attempt to assassinate Severus himself. As in previous cases, Judge Severus is aided by his private secretary and freedman Alexander, his police aides Vulso and Straton, his court clerk Proculus, his wife Artemisia, and his judicial assessor, Flaccus, all of whom reconvene to solve what really happened and track down Ipse.This book, as the others in the series, is both a mystery, and a sojourn into the daily life of Ancient Rome and its courts, police and criminal law. All laws, rescripts and legal procedures are from Roman law sources. Alan Scribner was an Assistant District Attorney in the office of Frank S. Hogan in New York County and a criminal defense attorney. He is also an independent scholar of Ancient Rome, co-author with J.C.Douglas Marshall of Anni Ultimi: A Roman Stoic Guide to Retirement, Old Age and Death. Scribner is the author of the Judge Marcus Flavius Severus Mysteries in Ancient Rome series: Mars the Avenger, The Cyclops Case, Marcus Aurelius Betrayed, The Return of Spartacus, Mission to Athens, Across the River Styx and The Persian Assassin.