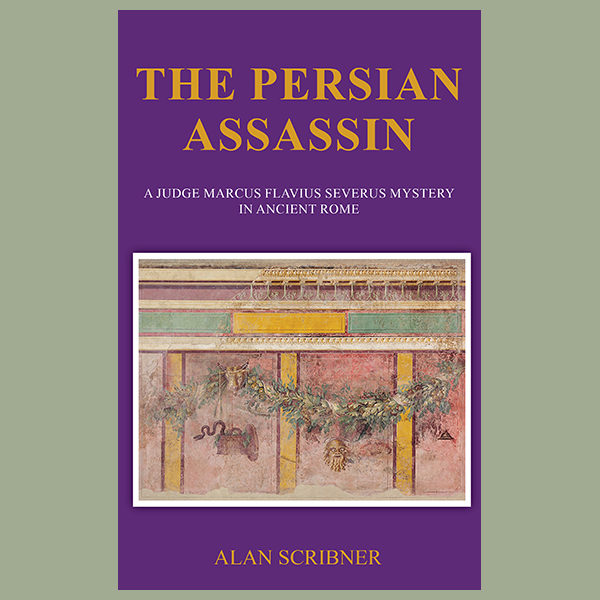 The Persian Assassin is the 7th in the series of highly acclaimed and best selling Judge Marcus Flavius Severus mysteries in Ancient Rome. This story takes place in the year 169 CE during the reign of Marcus Aurelius. It is 6 months after the events in Across the River Styx and Judge Severus now wants to retire and live his life with his family in the countryside, where he can study philosophy and history and astronomy and contemplate. He is fed up with dealing with the problems of the huge Urbs.

By the time this information reaches Rome, the Emperor Lucius Verus is already dead, apparently from a stroke. But was he murdered by a Persian assassin? And whether he was or not, if there were an assassin on the loose, Marcus Aurelius would be the next target.

Severus receives a letter from Marcus Aurelius, his friend from childhood, saying that the curiosi are stumped in their search for the Persian assassin and request the help of Judge Severus. Reluctant as he is to come out of retirement, Severus cannot refuse the Emperor.

As the investigation gets underway, there is a scary attempt to assassinate Marcus Aurelius by infiltrating an Egyptian cobra into the Emperor’s own bed. By happenstance, the attempt fails. The ensuing investigation leads to places and suspects inside the City of Rome and outside, at the Imperial villa in Lanuvium and the Marsic snake charming cult on Lake Fucinus.

As in previous cases, Judge Severus is aided by his private secretary and freedman Alexander, his police aides Vulso and Straton, his court clerk Proculus, his wife Artemisia, and his judicial assessor, Flaccus, all of whom reconvene to assist in tracking down the Persian assassin.

This book, as the others in the series, is not only a mystery, but also captures the daily life of ancient Rome and is a sojourn into the world of courts, police, espionage and criminal law of the period. All laws, rescripts and legal procedures are from Roman law sources.