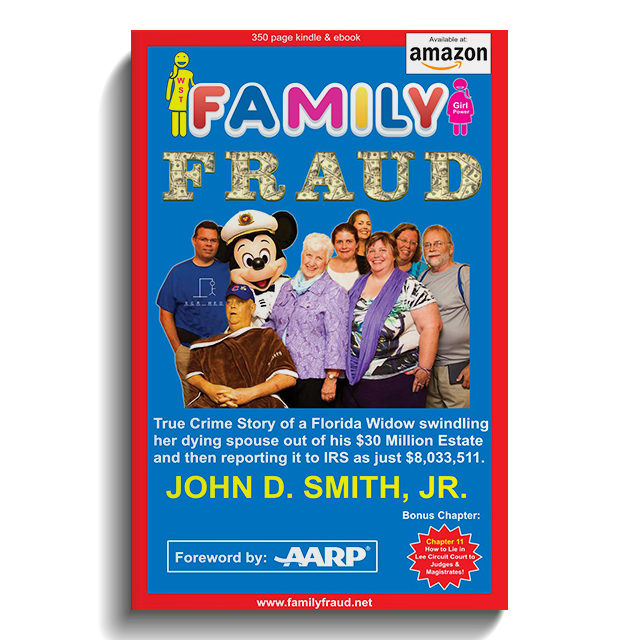 True Crime Story of a Florida Widow swindling her dying husband out of his $30 Million Estate and then reporting it to the IRS as just $8,033,511

FAMILY FRAUD describes how wealthy Lee County, Florida retiree John D. Smith, Sr. was swindled out of his $30 Million Estate and shows you how to protect your loved ones from financial exploitation.

Like many Americans, Mr. Smith created a Living Trust. It was dated December 14, 1998 and was made by the Lillig & Thorsness Law Firm of Oak Brook, Illinois. His 1998 Trust had instructions on how to divide his vast $30 Million Estate. His wife of 47 years, Mary Frances Censky, would receive half, or $15 Million. His 5 adult children of Jenny Smith, John D. Smith, Jr., Kristin Greenlee, Karen Becker-Smith & KC Lemson would split the remaining $15 Million equally. Mr. Smith chose First National Bank of Chicago to be his Trustee, but NOT his wife or children. All decisions regarding his $30 Million Fortune were to be handled at the discretion of his Bank.

On Monday, August 5, 2013, Mr. Smith was not lucid, according to Daughter Karen and not making any sense, according to his wife Fran. On that day, Naples Trust Attorney Christopher Marsala visited Mr. Smith on his deathbed. Attorney Marsala had an “Amended & Restated 2013 Trust” that would make Fran Sole Trustee and give her all of Mr. Smith’s $30 Million, without any oversight from his bank. However, there was a problem–Mr. Smith couldn’t hold a pen or sign his name legibly. Not to worry–Fran and her daughters Forged Mr. Smith’s signature via “writing transfer” and then destroyed the unsigned 2013 Amended & Restated Trust to hide evidence of the Forgery.

On September 30, 2014, Fran falsely declared his $30 Million Estate to the IRS as just $8,033,511. From 2014–2022, she went on an $11 Million spending spree. She bought 10 rental homes for $3 Million in cash, donated over $1 Million to John Carroll University & $675,437 to St. Francis de Sales High School, both of Ohio. Fran now has $11.5 Million remaining, according to her Fort Myers, Florida Attorney Kenny Kemp. Thankfully, the 6 year statute of limitations for Federal Tax Evasion has expired, so they don’t need to worry about IRS prosecution.

FAMILY FRAUD was written by Mr. Smith’s only son, John D. Smith, Jr. It will introduce you to the Smith & Censky families, with many photos and biographicals. If you are wealthy and don’t want to pay Estate Taxes, the Author will show you how to Screw the IRS and commit Estate Tax Evasion, like his mother. He will introduce you to mother’s incompetent Florida accountants and dishonest Florida Attorneys and show you how to lie in Lee County Circuit Court.

FAMILY FRAUD is more than a True Crime story. It is also a Love Letter of a 54 year old man to his deceased Father, saying, “Dad I did the right thing, no matter what it cost me.” After all, there are more important values than money. Especially money stolen from the IRS.

All ebook profits are being donated to the Lee County Sheriff’s Economic Crimes Unit.