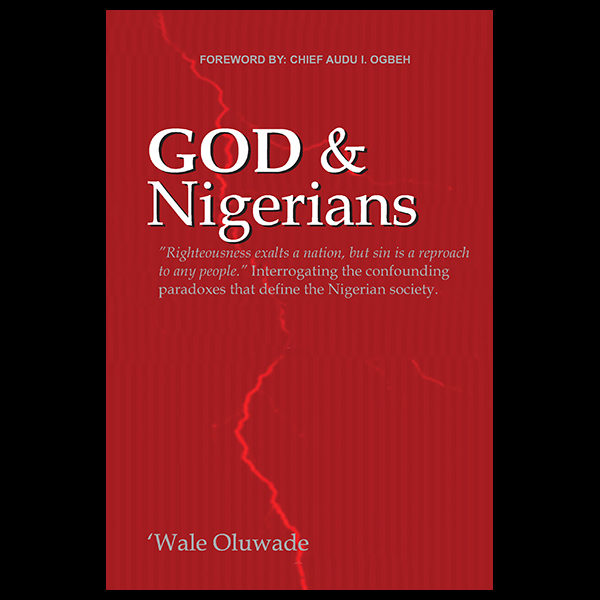 French Philosopher, Scientist, Mathematician and Writer, Blaise Pascal, in 1660, posed the question: “God is or God is not – which way should we incline?” He attempted to unravel the struggle between reason and decision on the reality or existence of God . His thoughts are quite poignant and fitting theme in this book.

As a Nigerian, no race or nation profess love for religion as Nigerians! Not even Israel and Saudi Arabia. However, the Nigerian brand of religiosity, I believe is second to none. Nigerians will and have killed, joyfully too, for their faith! Nigerians will defend the superiority and authenticity of their faith passionately and vigorously and deem others as “unbelievers going to hell fire!” I could go on. Thus, here lies my dilemma; “How can a nation that professes such religiosity become totally overtaken by evil in all spheres of national and corporate life?” How can a Nation, and indeed, the continent of Africa, where religion is truly an opium, be so economically wretched, technologically backward, politically retrogressive and especially, spiritually anemic? Religion ought to be an experience in spirituality, with its attendant virtues, as manifested in nobility of character, but that is not the reality here.
This has led me to discover that a nation can be religious and yet at the same time, not be godly. “Is Nigeria a godly nation or more appropriately, “are Nigerians, godly people?” This is the one crucial and most important question this book attempts to answer. “Godly” here connotes some of the attributes and personality traits of God. God has certain essential attributes, which are peculiar to Him only, but some of His general attributes man shares with Him. And these are; Love, Truth and Justice.

Who is God?
God is Spirit, not a Spirit, but is Spirit.5 God is everlasting and immutable. Also, God is not a man and can NEVER be a man. Importantly, God is Omnipotent, Omniscient and Omnipresent. God is just, merciful, compassionate
and good. The ONLY one good is GOD! Now, no one has seen God at any time, however, He manifests Himself
through His attributes. God is the perfect expression of Love, truth and justice. God is truth and He is justice. He doesn’t speak truth, He is TRUTH! And God has ordained these three attributes, especially, for man to imitate
Him in our interrelationships with one another. All the monotheistic religions preach these; the call to Love our neighbor as ourselves, to speak Truth always and uphold the cause of Justice, without fear, favor or partiality.
These, are universal and immutable laws governing man’s interrelationships on the earth. It is how we behave relative to these universal precepts that determine our righteousness or otherwise, in the eyes of God.

Critically, God is irreligious, that is, he is neither a Moslem, Christian, Judaist or Buddhist. God has been God before all the religions were founded and He has always related with men. And no one was born a Christian or Moslem or Buddhist. We were all introduced to whatever religions we practice after our births.
So, I have given this brief instruction on the nature of God to say that; it is not fidelity to a particular religion that determines the success or otherwise of nations. It is, however, fidelity to and compliance with the universal laws ordained by God which determines the success, progress, development, prosperity or advancement of nations.
Religious leaders have failed Nigeria and Africa. And since I am a Christian, I believe Christian leaders failed Nigeria even more. The messages of instant gratification, ‘sudden wealth’ and ‘overnight breakthroughs’ have caused tens of millions to lose the pure essence of religion, which is a call to spirituality, manifesting in asceticism, self-abnegation, righteousness and
sacrifice. But the brand of Christianity I see now, is extremely strange indeed! It is wholly worldly, carnal, sensual and an utterly perverse corrosion of the simple but.

Previous ProjectGreat Power in the blood of Jesus
Next ProjectKale Soup