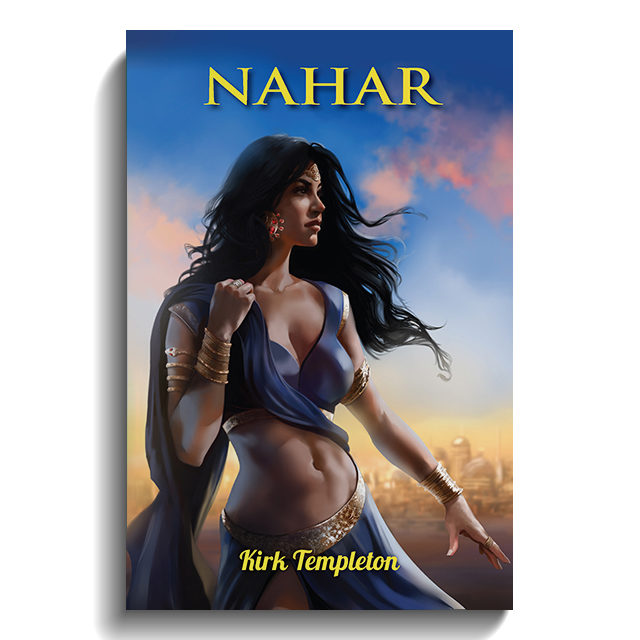 “This is an incredible read! First I have to talk about the writing. It is beautifully descriptive….There is war, there is love, and the story is captivating in every way.” –Courtney Christensen, Netgalley review.

The name of the city was Samandal, and Nahar was it’s queen, and both city and queen were beautiful.

So begins the epic fantasy of Nahar, a story of love and transcendence set in an alternative world with an Indo-Persian flavor.

Nahar, is the beautiful young queen of Samandal, a city-state located on the rich trade routes linking the Inner Regions of the desert with the Kurgon Empire. She rules alone and well until both she and her city are taken by Timur, the paramount warlord of the Mrrrg, a semi-human race of ferocious and savage conquerors. He captures both her body and heart leaving her torn between love and desire and her duty to her people. Forced to serve the pleasure of the conquering Mrrrg yet recognizing in Timur her souls complement, Nahar finds herself plunged into a world where she not only not only experiences the depths of her own sensuality but embarks upon a profound voyage of self-discovery. Timur also finds himself torn, for Nahar has captured his heart as well. Yet he cannot appear weak before the other Mrrrg chieftains, especially Gimbutal, Timur’s cruel and cunning rival for leadership of the Mrrrg horde.

Meanwhile, the powerful matriarchs who rule Samandal’s Great Houses move in secret to foment revolt and free their city from the Mrrrg, and Nahar’s cousin, the princess Estara, must come to terms with her own involvement with power, desire, and destiny along with Bahadur, the captain of the queen’s Guards.

Within this swirling maelstrom of war and intrigue, passion and desire, Nahar must find her way not only to the perfection of love with Timur, but to her own self-realization.

Daring, even challenging in its sensuality, yet uncompromising in its celebration of the feminine, Nahar is comparable to Dune in the sweep and complexity of its alternative reality and to Kushiel’s Dart in its bold exploration of the boundaries of eroticism. Yet it is a story not only of surpassing love but of self-transcendence as well.

This Romance includes powerful and explicit sexual fantasies and graphic depictions of war and violence. Please be advised that it is intended for mature readers only.